Originally Published: 5/15/2010 – by John Smith
If you’re a Methodist or a Moravian, the place you definitely should be at noon today or next Saturday is the GoggleWorks. If you’re a Lutheran, or another type of Protestant, you should go as well.

These are the final two showings of the full-length film “Wesley,” a biography of John and Charles Wesley, founders of the Methodist Church. It was directed and co-written by John Jackman, former pastor of Reading Moravian Church, on hand for last Saturday’s Reading debut.

This is no low-budget, amateurish production. It’s a movie that in acting, music, cinematography and story stacks up with the best of Christian films.

“…stacks up with the best of Christian films.”

You know it’s a class act when June Lockhart and Kevin McCarthy show up in brief – but important – roles. “June was really cool,” said Jackman, who noted that McCarthy, whom he also praised, feels at age 92 he has earned the right to eat (and drink) whatever he wants.

You also know it’s not a typical Hollywood production when the ubiquitous story line of boy meets girl, boy loses girl, boy gets girl ends a phrase short. (Wesley, who says no to the alluring Sophia because of his vow to God, and thus invites trouble, eventually married, unhappily, at age 48, long after the film ends.)

Moravians will be interested, of course, because of the effect their calmness had on Wesley during the famous fierce Atlantic storm, after which Wesley credits them with “a peace I don’t have and a confidence I don’t feel.”

And Lutherans can be proud that Wesley’s conversion experience in Aldersgate Street stemmed from his hearing Luther’s “Preface to Romans.” Wesley, like Luther, had been trying to work his way to heaven.

The attention to detail is mirrored in one scene, when Wesley reads 1 Corinthians 13 with love instead of the charity of that era. Jackman explained that Wesley authored a Bible translation that used love, and actor Burgess Jenkins wanted authenticity.

One viewer questioned the lack of music of brother Charles’ hymns. Jackman explained that Charles was a poet, not a composer; the music familiar to us was not written until many years later.

The flashbacks to the nearly fatal house fire when Wesley was 5 are effective.

And the many vignettes are artfully worked into the story:

John’s arguments (in love) with Charles; his handling of the boys teasing their shoeless schoolmates; his flight in darkness from Georgia; his winning over an advancing angry mob; his reluctant acceptance of unordained preachers; Bishop Ryder’s approval of him because, though he disliked Wesley’s methods, he loved the results.

“So many stories,” Jackman sighed. “We had to cut.”

Wesley’s concluding sermon warns against emphasis on ritual and doctrine and extols instead a heart transformed by love. 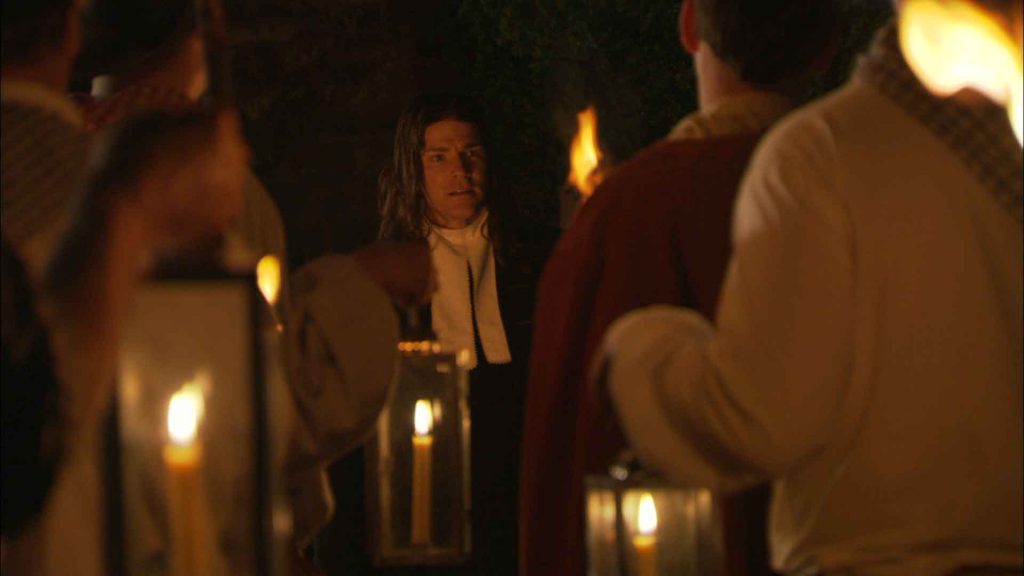